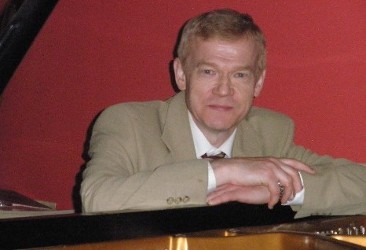 Nicholas O’Halloran began his piano studies with Frau Tilly Fleischmann in Cork. Later, at the Cork School of Music, he studied under Maud O’Hanlon and Jan Čáp, winning the major awards at Feis Maitiu, Cork and Feis Ceoil, Dublin. He completed a B.Sc. in Mathematics before turning to full-time study of music.

In 1980, a scholarship from the Italian Government brought him to Rome and Siena to study under Maestro Guido Agosti. In 1981, as the first recipient of the Fulbright Award for a student of the Arts he went to the United States to study with the internationally renowned Hungarian pianist Béla Siki at the University of Cincinnati from where he graduated with a Master of Music in performance.

He has appeared as soloist with the Irish Youth Orchestra, RTE Concert Orchestra, Cork Youth Orchestra and Cork Symphony Orchestra, as well as the Orchestras of UCC and Waterford Regional Technical College.  He has featured in a recording of contemporary Irish piano music released by the Arts Council, playing music by the late Dublin based composer James Wilson.  He has performed for the Diplomatic Corps at Iveagh House and for an International Conference of the OECD at University College, Cork.  Recitals include Weymouth Arts Centre UK, Kilkenny Arts Festival, Hugh Lane Gallery, Dublin, St Patrick’s College, Maynooth, Bantry House, as well as numerous appearances in Cork.  He has partnered Keith Pascoe, Seamus Conroy, Elizabeth Cooney (violin) and Eilis O’Sullivan (flute) in duo recital. Nicholas is Chairman of the Crawford Gallery Summer Lunchtime Concert Series and a member of the Advisory Committee of Feis Maitiu, Cork.