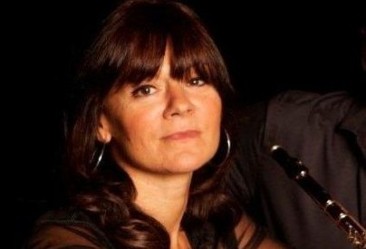 Pianist and Flautist Sabine Ducrot has appeared as a soloist with some of France’s leading orchestras including the Orchestre de Paris, the Orchestre National de France and the Orchestre de Radio France.  She has performed at major international venues in particular in Paris, in Salle Pleyel, Théâtre des Champs-Elysées, Salle Gaveau and Salle Cortot.  She has recorded and performed live broadcasts for French radio and television and for Lyric FM.

Sabine’s exceptional musical talents were evident from an early age when, at the tender age of twelve she is broadcasted on French television performing her first flute concerto with the "Orchestre d'Île de France".  At thirteen, Sabine she won the French ‘Young Musician of the Future’ competition on flute and the following year won the same competition on piano. This gave her the opportunity to perform as a soloist with "Orchestre  de Radio France" salle Pleyel in Paris in bothinstruments.At sixteen she gets a place to study at the prestigious " Conservatoire National Superieur de Musique de Paris(CNSMDP)"in  flute and the following year in piano, the first student in the history of the conservatoire to be accepted in two principal instruments, and qualifies with the coveted "Premier Prix".(1st Prizes)

Just before moving to Ireland Sabine was appointed principal flautist of the Orchestre Philharmonique de France and professor of flute at the Conservatoire National de Region in Paris. Sabine currently lives in Cork where she is a lecturer in flute and piano at CIT Cork School of Music. Sabine as always remarkably continued to have a career on both instruments. As a pianist she has enjoyed collaborating with pianist Michael Joyce; together they have toured as a  piano duo and in 2012 gave electrifying performance throughout Ireland of Stravinsky's Rite of Spring with dancers from the Fidget Feet Dancecompany.Sabine and Michael have also toured as a flute and piano duo supported by the arts council,music network-performance and touring award,culture Irelandaward.She's performed regularly in Ireland(Dublin National Concert Hall,Glore Ennis,Kilkenny Castalia Hall,Waterford Christchurch Cathedral,Cork Triskel art Center,...)and abroad(London, Paris,Cologne,Spain,Switzerland,Italy).

She lately has formed a new duo with violinist Katherine Hunka (leader of the ICO)and they performed at the Crawford art Gallery series.

Sabine also performs also regularly with her two sons violinists and flautists Eoin and Cian as a duo or trio.

Projects fr 2017 are recitals in France(Bordeaux)and Italy(Venice)with pianist Gabriela Mayer and at the piano as sonata duos with flautist Fiona Kelly and violist Ed Creedon.