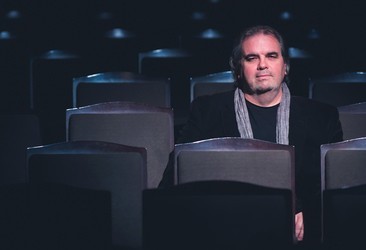 David studied piano, violin, viola, clarinet, chamber music, orchestra, choir, theory and harmony at the Royal Irish Academy of Music for over eighteen years and was awarded the Coulson Scholarship and ARIAM, before plunging into a busy career that to date has included work as MD, orchestrator, keyboard player and producer in theatre, radio, music tech, TV, studio and education.

He spent three years with Riverdance - The Show as Musical Director and subsequently Production Director with responsibility for the artistic well-being of all three touring productions worldwide. In addition, he produced the soundtrack for the multi-million selling DVD Riverdance – Live at Radio City Music Hall N.Y.

Film credits include Circle Of Friends, Some Mother’s Son and co-composer for The Sun, Moon and Stars (Blue Light Productions) and Up The Country (Asylum Productions). Additionally, David has provided soundtracks for several award winning documentaries by Kairos Productions and was responsible for the production music and opening sequences of two Eurovision Song Contests (1994 and 1995) with live viewerships in excess of 200 million each.

Theatre credits include a commission to score the Abbey Theatre’s production of The Hostage and conductor of two chamber operas by Michael Scott based on Yeats’ plays: Purgatory and The Dreaming of the Bones.

David is a multi-award winning MD in musical theatre and has also scored the orchestrations for eight original musicals,  the latest being Find Your Way Home which premiered at Symphony Hall, New York, in July 2017. He was Musical Director and Supervisor for all five series of RTÉ’s The Voice and Series 1 of Dancing With The Stars – for Screentime Shinawil and RTE and has also worked with and for BBC NI, UTV and TG4 including several joint OB broadcasts for BBC / TG4. He has held MD / Supervisor positions at most of the major theatres in Ireland including Cork Opera House, the Olympia, the Gaiety Theatre, the Abbey Theatre, the National Concert Hall, Wexford Opera House, Belfast Opera House, Millennium Forum (Derry) and the 3 Arena.

He was MD and Producer for singer Tommy Fleming for twenty years, touring internationally and arranging and producing fifteen albums including the now 20 times platinum Voice of Hope, and four live DVDs, including several with the RTÉ Concert Orchestra (CO) and for Universal Music Ireland. In fact, David has played with and orchestrated for both the RTÉ CO and the National Symphony Orchestra. He has also been engaged by international stars such as Josh Groban, Gary Barlow, Paul Potts and Frankie Valli for their Irish tours, in addition to production work for Kelly Clarkson (X-Factor UK) and Prodijig (both Footstorm and Revolution).

Way back in 2006, he collaborated as co-composer of the soundtrack for the cartoon Zombie Hotel, a 28-episode cartoon series for French company Alphanim, which was broadcast worldwide including the UK (BBC), Australia (ABC2), Canada (Tele-Quebec), France (France3),  Russia (REN TV), Europe (Disney Channel) and USA (HBO).

David has now been MD for over fifty musicals having played his first, aged twelve and been MD at age fifteen and now, forty-five years later, he is recognised as one of Ireland’s foremost MDs with particular regard to his specialisation in song interpretation and he has also played with many of the UK touring shows at the Bord Gáis Energy Theatre, including Dirty Dancing, Grease, Sound of Music, Oliver! and The Lion King.

In 2012, he was engaged by the Abbey Theatre as Music Supervisor for their critically acclaimed world premiere of Alice In Funderland, which was nominated for Best Production at the Irish Times Theatre Awards 2013. In 2017, he was Musical Director for two musicals in Ireland, both of which were nominated for Best Overall Musical and which came first and second respectively: Parade and Legally Blonde. In 2018, he was again nominated twice for Best Musical Director: for both Jesus Christ Superstar and West Side Story.

He has seen all sides of the musical theatre world having also been a producer for Goldenboy Productions Limited, for their three full scale, professional productions in Ireland: Singin' In The Rain, The Full Monty and The King & I.

Also in 2017, David was delighted to have been awarded a first class honours MA in Music from CIT Cork School of Music. He was previously awarded a distinction by both UCLA and Screen Training Ireland for the first two modules of the UCLA film scoring  programme and was also awarded the inaugural IMRO Copyright Scholarship on their Specialist Copyright programme at Griffith College, Dublin.

He is delighted to have used his many industry connections to create and facilitate positions for many BAPM and BAMT students already, in Ireland, UK and USA, in theatre, TV, studio and live work and also to now be able to bring established musicians in the other direction, i.e. back to MTU Cork School of Music.