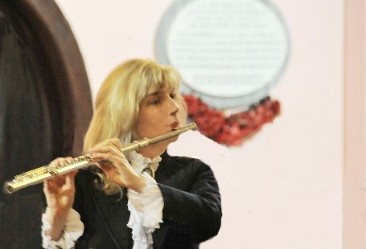 Irish flautist Eilís O'Sullivan graduated from the Cork School of Music and, as a scholarship student, continued her studies at the Royal Scottish Academy of Music and Drama. She graduated with B.A. (Hons) and M.Mus with Distinction.

Eilís is much in demand as a solo, chamber and orchestral musician, having broadcast and toured extensively. Throughout her career she has been distinguished with many awards including the Silver Medal of the Worshipful Company of Musicians, London and first prize in the Governor's Recital Prize Competition at the Scottish Conservatoire.

Eilís has performed widely as a soloist. Recitals include performances at St. Martin in the Fields, London, Sir Adrian Boult Hall, Birmingham, NCH, Dublin, with Crash Ensemble in Germany, for the Prince of Wales at Hollyrood Palace, Edinburgh and at the main concert hall and music club venues throughout Ireland and Britain. Guest concerto engagements include performances in Seattle, USA, Glasgow & Edinburgh, Scotland, and broadcast with the RTE Concert Orchestra, Dublin. As an active chamber musician some of Eilís' recent performances include Debussy's Sonata for Flute, Viola and Harp, Beethoven's Trio for Flute, Bassoon and Piano, Wind Trios for ClassicalKids and NCH appearances with the Orpheus Trio. As an orchestral musician she has freelanced with the RSNO, SCO, BBC Wales, NSOI and RTECO. Eilís is an experienced examiner, adjudicator and also gives masterclasses.

Currently Eilís is a lecturer at the CIT Cork School of Music, Ireland.