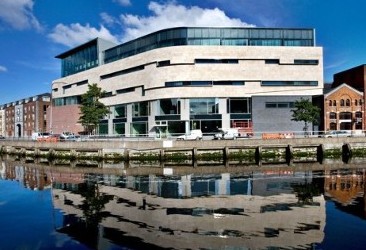 Joan Scannell is a cellist and has been Head of String String Studies at CIT Cork School of Music since 2006. Joan is a Cork native and was one of the first students selected from her primary school for the, then experimental, Suzuki String Programme, piloted by Denise and Renee Lane, as an initiative of the CSM and its director Bernard Curtis. The CSM Suzuki Scheme continues to be an integral part of the city’s music education infrastructure under her watchful eye.  Joan later studied with Canadian cellist, Paul Pulford, and also Michael Steinkuhler, Ursula Willis and Gerry Kelly.

An honours BMus graduate of UCC, Joan also was awarded an MA in Performance from CIT CSM, having previously been awarded a Dip.CSM – the precursor of the current BMus degree. She combined a career as a freelance orchestral player – RTE National Symphony Orchestra; Galway Baroque; East Cork Choral Society et. – with her teaching for Cork School of Music, Cork County School of Music, and Kerry School of Music. A keen chamber musician, Joan was for many years a member of the Orpheus Trio, among other groups, performing around the country and making several broadcasts for RTE TV. She also lectured and coached chamber music at University College Cork and was, for a time, a member of Jimmy Crowley’s infamous Stoker’s Lodge!

Since becoming Head, Joan has managed a period of change and has kept the String Department as the preeminent centre for string training, at every level, in Ireland. Recruiting all four members of the original Vanbrugh String Quartet, and many professionals from the Irish Chamber Orchestra has been key to maintaining the standard that continues to see students and graduates continue to win national and international awards and prizes and become appointed to positions in professional orchestras around the world.