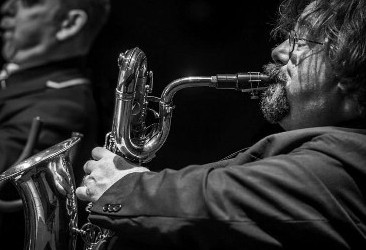 John O’Connor is a conductor, musical director, and woodwind player. The Head of Jazz, Pop, Trad, Voice & Theatre Studies since its creation in 2018 he was previously the Head of Wind, Percussion, Voice & Drama Studies at CIT Cork School of Music, where, in addition to the subjects listed in the title, he oversees the jazz programme and burgeoning Traditional Irish music provision, also the BA degree programmes in Popular Music and Theatre & Drama Studies, and the new BA in Musical Theatre.

In the theatre, John has produced, directed or been musical director for West Side Story, A Chorus Line, Fame, Guys and Dolls, Jesus Christ Superstar, My Fair Lady, the Mikado, Man of La Mancha and The Marriage of Figaro. For TV he has produced music for RTE (Gerry Ryan’s Citizens II and Childrens’ TV’s Wordwitch series) and film credits include Song for a Raggy Boy and The Young Offenders – winner of the Best Irish Film at the 2016 Galway Film Fleadh.

John introduced jazz to the CSM curriculum in 1993, as the founding conductor of the CSM Jazz Big Band with whom he has toured Ireland – and abroad to the UK, France, Italy, Germany, Holland, Belgium and the United States (New York and Chicago). Starting his career as a community musician with the founding team of the Gleneagle Killarney Band he moved back east and founded the Ballincollig Concert Band in 1988. There he developed an independant instrumental system that culminated with four bands and 150 students. This was ultimately taken over by the Cork Co. VEC. The BCB won many prizes at the National Band Championship and band festivals all over Ireland, making it to the second prize in the Concert Band Advanced Class. He conducted the CSM Symphonic Wind Ensemble from 2000 to 2018, performing all over Ireland and the UK in concerts and broadcasts of contemporary wind music for large ensemble.