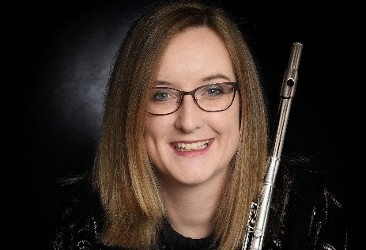 She has a first-class honours Undergraduate Degree and Masters Degree in Flute Performance from the CIT Cork School of Music and in those years took part in various masterclasses in Ireland and abroad with some of the world’s leading flautists, including Sir James Galway, Anna Noakes, Keith Bragg and Rachel Brown. She also specialised in conducting and has partaken in various conducting courses.

Maria lectures on the BMUS and BA in Musical Theatre (BAMT) courses at the MTU Cork School of Music. She specialises in music origination, particularly the use of the music notation software, Sibelius. Maria has also made use of her Sibelius skills by delivering continuing professional development courses for staff as well as assisting colleagues with musical typesetting. Maria is delighted to be part of the new BAMT team where she is delivering a course on rudiments of music that makes particular use of CSM’s wonderful technological facilities.

Maria also teaches flute with the Cork ETB School of Music and conducts the Ballincollig Youth Band. She has delivered numerous masterclasses around Ireland including workshops and a solo recital at the Limerick School of Music. Maria is a founding member of the Cork Flute Society.

Solo engagements have included a concerto performance with the Cork School of Music Wind Ensemble and various solo performances with the Cork Fleischmann Symphony Orchestra as part of Cork Midsummer festival and more recently performing some of Vivaldi’s Four Seasons on the flute. She has also performed flute and piano recitals in Cork at the Crawford Art Gallery, Alliance Francaise and Maryborough House Hotel as well as in the John Field Room at Dublin’s National Concert Hall.

As a chamber musician she enjoys performing with her flute quartet, ‘Hifilutin’ who perform a wide variety of genres. She also plays with flute, viola, harp trio ‘Les Trois’. Maria is part of various other chamber groups and has played for Classical Kids in the National Concert Hall, Dublin and at the Kinsale Arts Festival. As well as performing chamber music, Maria has coached with the IAYO and numerous small groups, most notably the ‘Fluteenys’ Flute Quartet

who performed at the Late Late Toy Show as well as at countless charity events.

Maria currently plays with the Cork Opera House Concert Orchestra, who have undertaken concert performances of many operas in the last five years, the Irish Symphonic Wind Orchestra (ISWO), Cork Philharmonic Winds, Cork Concert Orchestra, Cork Fleischmann Symphony Orchestra and has played with artists such as Tasmin Little, Nigel Kennedy, Katherine Jenkins, Paul Potts, Declan O’Rourke and Il Divo. Maria has also played with the Kilkenny Arts Festival Orchestra, East Cork Orchestra, Cork Opera 2005 and the Cork Pops Orchestra, National Youth Orchestra of Ireland and the Irish Youth Wind Ensemble with whom she also tutored for many years. Maria performs regularly in community settings such as at nursing homes in her area.