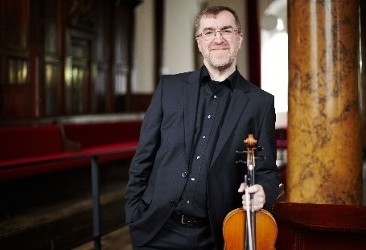 A graduate of the Royal Academy of Music, London, Simon Aspell is one of Ireland’s leading viola players. In 1985 he and his colleagues formed the Vanbrugh Quartet, successfully auditioning to become the fourth resident quartet in Cork for RTE the following year. The Quartet won the London International String Quartet Competition in 1988, and an international performing career quickly followed throughout Europe, Asia and the Americas, at major concert halls, and international festivals, as well as the release of over thirty CDs, culminating in the complete cycle of Beethoven String Quartets, released in 1996. That same year, the quartet co-founded the West Cork Chamber Music Festival in Bantry, now frequented by some of the world’s finest musicians on the chamber music circuit. As a member of the Vanbrugh Quartet, he has with his colleagues dedicated his musical life to bringing chamber music to all corners of Ireland, and to supporting the country’s composers and young musicians.

In November 2016, the Vanbrugh Quartet were presented with a Lifetime Achievement Award from the National Concert Hall, "for the enormous contribution they have made to their beloved art-form of the string quartet and to the musical life of Ireland".

Since the retirement of Gregory Ellis, the remaining members continue to perform as The Vanbrugh, a flexible ensemble that can incorporate repertoire from string trio upwards. Recent collaborations have included explorations of the piano quartets of Mozart, Brahms, Dvorak, Faure and Stanford with Michael McHale, as resident ensemble to the National Concert Hall, Dublin.

Simon has also had a successful career as an orchestral principal, guesting with the Chamber Orchestra of Europe, Royal Northern Sinfonia, Royal Liverpool Philharmonic, as well as appearing as soloist and recitalist throughout Ireland and the UK.

Simon has previously been a Director of West Cork Music, and continues to be Artistic Director/Managerof The Vanbrugh Camerata.

The Vanbrugh have been Artists in Residence at University College Cork, since 1990.

Simon teaches viola and chamber music at both the CIT Cork School of Music, and the Royal Irish Academy of Music, in Dublin.