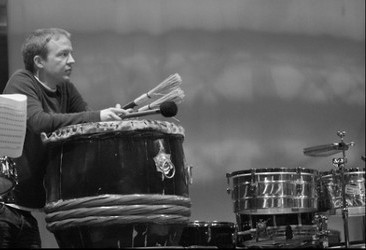 Stephen Kelly is lecturer in Percussion at the CSM. He is fluent in all styles of music, from Classical & South American Percussion to Jazz & Pop drumkit. Stephen's teaching philosophy stresses the need for percussionists & drummers to  be well versed in all styles of music and drumming techniques in order for the student to be equipped with the necessary tools to embark on a long and fulfilling music career.

Performing credits include Lalo Schifrin, John Scofield, Bryn Terfel, Marvin Hamlisch, Placido Domingo, Kodaline, Declan O'Rourke, Alan Bergman, The Chieftains, Imelda May, Ute Lemper and he has worked with a multitude of orchestras and ensembles in Ireland & the U.K.  Stephen holds a BMus from the Royal College of Music and an MMus from the DIT.