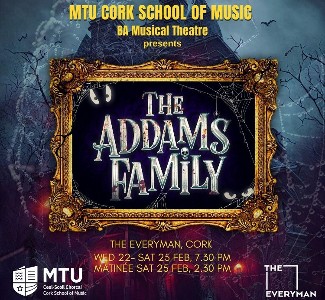 The hilarious musical The Addams Family is the first full-scale musical production from the BA (Hons) in Musical Theatre at MTU Cork School of Music. The next generation of professional performers from all over Ireland, with a top-notch professional creative team, and a signature dynamic orchestra, guarantee a spine-tingling night of musical pleasure!

The unforgettable characters created by the cartoonist Charles Addams as an inversion of the ideal 20th-century American family have delighted audiences worldwide. This musical comedy version is from the award-winning writers of the hit Jersey Boys, with music and lyrics by Tony award-nominated Andrew Lippa.

The comical feast features an original story which is every father’s nightmare: Wednesday Addams, the ultimate princess of darkness, has grown up and fallen in love… with a sweet, smart young man from a respectable family. Can Gomez keep his daughter’s secret until the two families meet for a fateful dinner with hilarious consequences?!

Join The Addams Family for a heart-warming tale of love, family and friendship… with a twist!

Credits
Cast from years 3 & 4 of the BA (Hons) in Musical Theatre at MTU CSM, with a live band drawn from students of the BA in Popular Music and BMus
Director: Christine Scarry
Musical Director: David Hayes
Choreographer: Stephen O’Regan