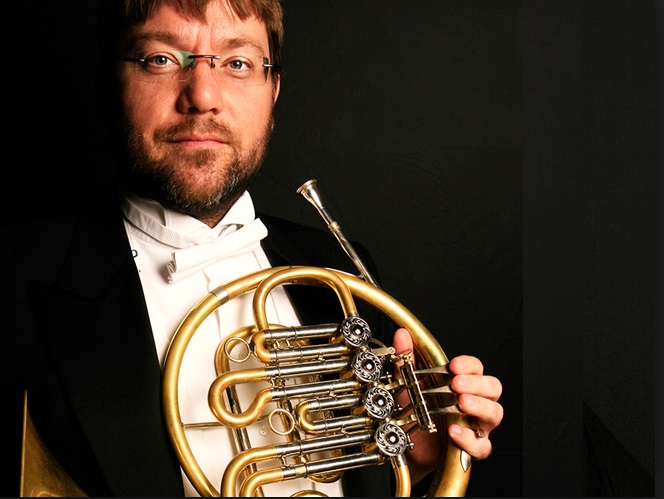 Dublin born Cormac Ó hAodáin started his musical studies in horn with Victor Malirsh at the Royal Irish Academy of Music and continued at the Royal Northern College of Music, Manchester and the Guildhall School of Music and Drama in London. Between 1993 and 1996 Cormac represented Ireland in the European Union Youth Orchestra, working with such eminent maestros as Carlo Maria Giulini, Kurt Sanderling, Georges Prêtre, Bernard Haitink, Mstislav Rostropovich and Vladimir Ashkenazy.

In 1997 he joined the Royal Philharmonic Orchestra under Daniele Gatti, also working with Yuri Temirkanov, Neeme Järvi, Paavo Berglund, Sir Yehudi Menuhin and Sir Peter Maxwell Davies amongst others. In 1999 Cormac moved to the Philharmonia Orchestra, performing with many of the world’s leading conductors, such as Wolfgang Sawallisch, Evgeny Svetlanov, James Levine, Sir Charles Mackerras, Christoph von Dohnányi, Christian Thielemann, Esa-Pekka Salonen, Charles Dutoit, Valery Gergiev, Gennadi Rozhdestvensky and Lorin Maazel. With these orchestras Cormac has toured extensively throughout Europe, Scandinavia, Russia, North and South America, the Near and Far East, Australia and New Zealand. Since 2009 Cormac has been a member of the RTÉ Concert Orchestra. In 2010 he performed Aloys Fleischmann’s Cornucopia for Solo Horn and Orchestra with the RTÉ CO as part of the Fleischmann Centenary year celebrations and in 2012 performed Richard Strauss’s 1st Horn Concerto with the RTÉ National Symphony Orchestra. Cormac has considerable chamber music experience and is a founding member of Cassiopeia Winds Wind Quintet, Vox Merus Brass Quintet and Musici Ireland Chamber Ensemble.

Cormac says: I completed my two year Taught Masters Degree in Performance in CIT Cork School of Music (CSM) in 2016, following in a long line of professional musicians from both the RTÉ National Symphony Orchestra and the RTÉ Concert Orchestra who had undertaken the Masters Degree in Music Performance at the CSM. The facilities are, without a doubt, the best in the country. Their state-of-the art concert hall, black-box theatre, recording studio, practice rooms each with at least one Steinway grand piano and the majestic views over Cork City from the incredible library are some of the reasons why I enjoyed my time in the CSM. The CSM also offers Masters Degrees in Composition, Conducting, Music Technology and Research and Degrees in Pop and Drama. This musical diversity allowed me to collaborate with Music Technology students in recording my own recitals, while also giving them the experience of recording live musicians. In the first year, monthly lectures took place on Fridays and Saturdays, which facilitated students who were working. While initially I found the lectures challenging one of the assignments, to deliver a Presentation, gave me confidence in preparing and presenting on a topic, which has been of enormous benefit to me. It was an invaluable experience to learn how to put on a concert, from planning and programming, promotion including designing posters and fliers, writing programme notes to rehearsing and performing with fellow students.